3D Printing: Building Cities in More Ways than One

For years 3D printing has slowly gained traction in a variety of fields: from printing fun toys, artistic models, functional tools, all the way to printing functional organs out of living cells. In more recent news, great strides have been made by the 3D printing community to print face shields, face mask straps, and ventilator valves for COVID-19 relief. And while 3D printing presents many unique opportunities for such ventures, when people see pictures of a final print, they are only seeing the final success… and none of the time, failures, learning, and work that goes into it. A lot of the process – at least for me – looks like the following: several test prints to test print settings, followed by a failed print, followed by a moderately successful print that self-terminated due to a printer error. In short, success is usually the result of many carefully calibrated failures.

Prior to working at Dunn Associates, my knowledge of the 3D printing world was relatively limited and simplified: grab a few models off of one of the many websites that act as a database of free models, load them into the Cura (printing software), and click print. A few hours later, collect the freshly printed model. Easy, right? But a majority of these models are already built, tweaked, and have recommended print settings to get them to work. So, when Eric Dunn came to me and wanted my input on printing buildings we had previously designed, I thought it was a fantastic and easily achievable idea. How cool would it be to be able to pick up a building we designed and be able to actually hold it?! The printer eventually arrived, and then I began to learn how wrong I was on the ease of creating a model from a Revit file that not only looks nice, but also prints successfully.

My first pass through was not exactly harrowing, but it certainly was eye opening, as it changed how I look at buildings now. As I opened the first Revit model to create a 3D printable file, I asked myself: “what is going to be printed? What won’t be seen, and therefore doesn’t matter and can therefore be removed?” A few moments passed with growing unease, and eventually I realized the answer: most of what had just been structurally designed. Columns. Beams. Braced frames. That one particularly obtuse detail that was satisfying to finally get to work with the architect’s desired overhang. None of it will be printed, and by extension, it can be deleted. Slight existential crisis aside, I finished ripping out all of the parts that won’t be printed, then comes the cleanup and in-fill.

To print successfully, the model must start solid… so every nook and cranny has to be filled. I check the entire model, filling all hallway

s, rooms, nooks and crannies with a solid. I find more things that have to be deleted. Chairs, toilets, piping. Doesn’t matter. All of it is ripped out and filled solid. I check the exterior. The wall joins aren’t behaving. The mullions don’t align and won’t print cleanly. That one particular window is clearly off-center and would look better if it shifted over a foot. Why couldn’t it be shifted? And then I realize: a column used to be there. Thought trails off…and I realize I’m looking at architectural elements, and suddenly I care how they look. A quote from a certain Christmas-stealing green-haired Whovian comes to mind, “And I care? What is the deal??” (The Grinch)

In many respects, 3D printing parallels the public’s view of buildings that have been designed. People’s first interaction and experience with a structure is from the outside, much like with a 3D model.   Few people actually see the structurally supporting elements themselves. Most of the time paint, gypboard, drywall, entire facades cover it up. Visually, the structural components don’t typically have any impact. Sometimes, they may play a prominent role in the profile or silhouette, but the architectural components are what a 3D model typically needs to print, and are what the general public see on a day-to-day basis.

The rather realization is not the most mind-blowing, but it has significantly altered how I see buildings: whether it’s casually as an observer, as a 3D modeler and printer, or as a structural designer. I always tried to consider the architectural impact on the structure, but now I try to design with the intent to avoid structurally impacting the architect. 3D printing may me realize most of what is seen at the end of the day is not our work, but the architect’s vision, and the best thing I can do I help them achieve that vision.

On a related note: If you are ready to embark on your own 3D printing adventure, you can do so without the commitment of buying a printer of your own.  Salt Lake City Public Library has several 3D printers that you can use to entertain your kids, 3D that missing part on your bike – whatever you need!

Click here to view a video of a recent print! 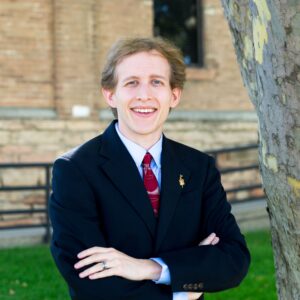 Kelly enjoys spending most of his time with his wife who is also a structural engineer. When they aren’t having lengthy discussions about structural engineering problems brought home from work, they enjoy cooking, baking, and playing board games together (or against one another). Kelly also enjoys competitive fencing and folding origami.