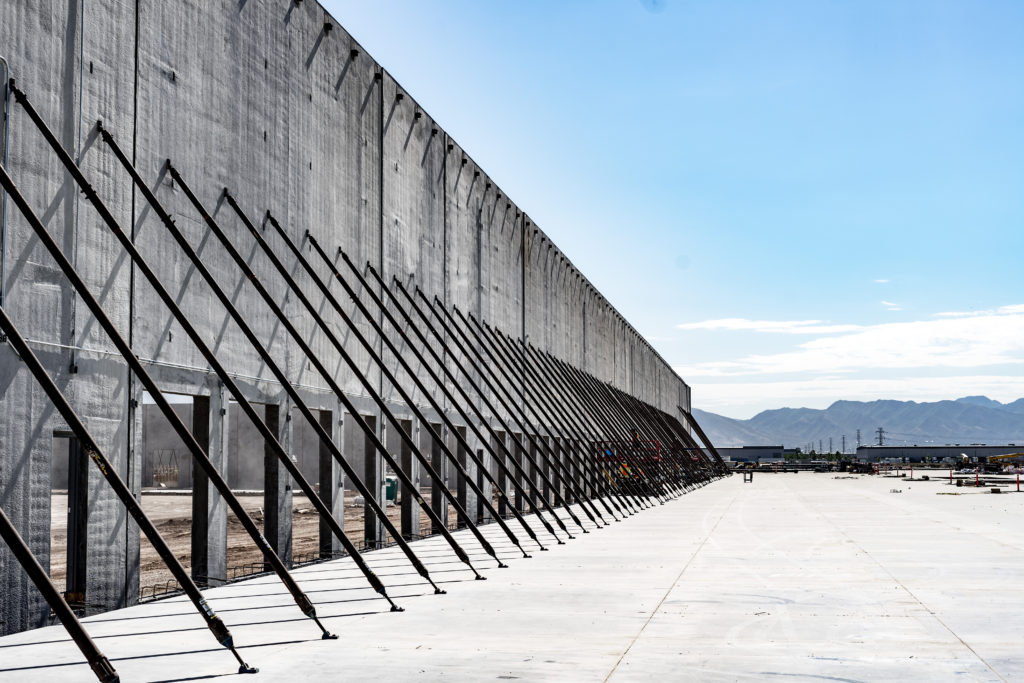 Multi-story tilt buildings in non-seismic areas can easily be five or six stories tall. Cost savings are derived from quick construction. Concrete tilt-up is inexpensive compared with a steel building with glazing of the same size. Utah is in a high seismic region, so economic buildings tend to be shorter, usually three stories or less. The cost savings are multiplied with taller buildings so multi-story tilt-up usually has a smaller cost difference compared with a steel building with glazing in Utah. Despite the limited height, these buildings seem to be gaining popularity. Recently Dunn Associates designed a two-story tilt up called the U of U Support Services Center, located South Jordan, Utah. This will be a two-story building. Airport Technology Parking (ATP), another project at the Ogden Hinckley Airport in Ogden, Utah is a three-story tilt-up building. If there is a situation where the budget is tight or there is a willingness to trade some of the glass on the outside for a nicer interior, this kind of a building could be a good fit.

Other aspects of a building that make it a good candidate for tilt-up construction include square footage, repeatability, and the scale of the project. The savings of height is often made up for with a shorter building with a comparable square footage. If the building is larger such that masonry becomes more expensive, and fire codes prohibit wood construction, this could be a good fit. Many warehouses, like UPS Distribution Center in Salt Lake City, Utah are tilt-up for these reasons. If the panel design is repeatable, then it saves time on the building construction. The two-story U of U Support Services Center, for example, only had two different kinds of panels. If the building is part of a series of similar buildings that have a repeatable design, tilt-up would also be a good candidate. Large campuses of warehouses like Freeport, in West Valley City, Utah or Business Depot Ogden (BDO) in Ogden, Utah. 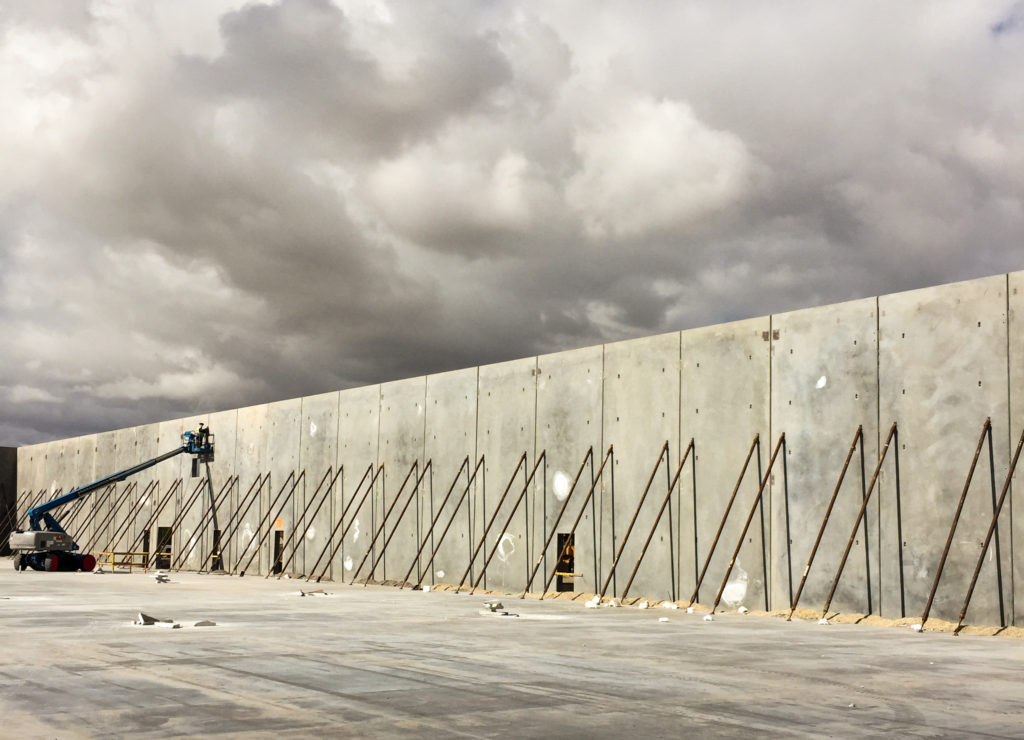 Some design considerations for a one-story tilt-up building are seismic out of plane bending in the wall and jamb thickness. Walls are affected by loads from a seismic event out of plane, and the wall needs to withstand this load. Out of plane loads become especially important on a garage door lintel in a tilt-up wall. The wall thickness can be affected by this load. More space may be required to fit the reinforcing in the wall to resist the forces.

Wide jambs are preferable from a design perspective to narrow jambs. When jambs are wider, the special moment frame provisions in the code can be avoided. Otherwise there is a high percentage of steel reinforcing in the jambs. This can be difficult to construct causing issues like honeycombing. The added cost of the steel repeated at every jamb that is that narrow can significantly increase the cost of the building when compared with a thicker jamb that is not in the special moment frame provisions. The cost of jambs that become honeycombed and must be repaired or repoured compounds the cost.

Two-story buildings are similar to one-story buildings because many of the aforementioned factors are still a concern. However, there are a few key differences. Two story tilt-up buildings are often controlled by overturning. This comes from having multiple diaphragms that are heavier than a one-story building. The additional floor is usually concrete on metal deck compared to just a metal roof. This adds to the seismic weight of the building, which influences overturning. Overturning is also influenced by the building height. The building may be taller than a one-story office, increasing the moment arm for the overturning. Overturning can be mitigated by welding together the panels using embeds, so that they act as one unit. 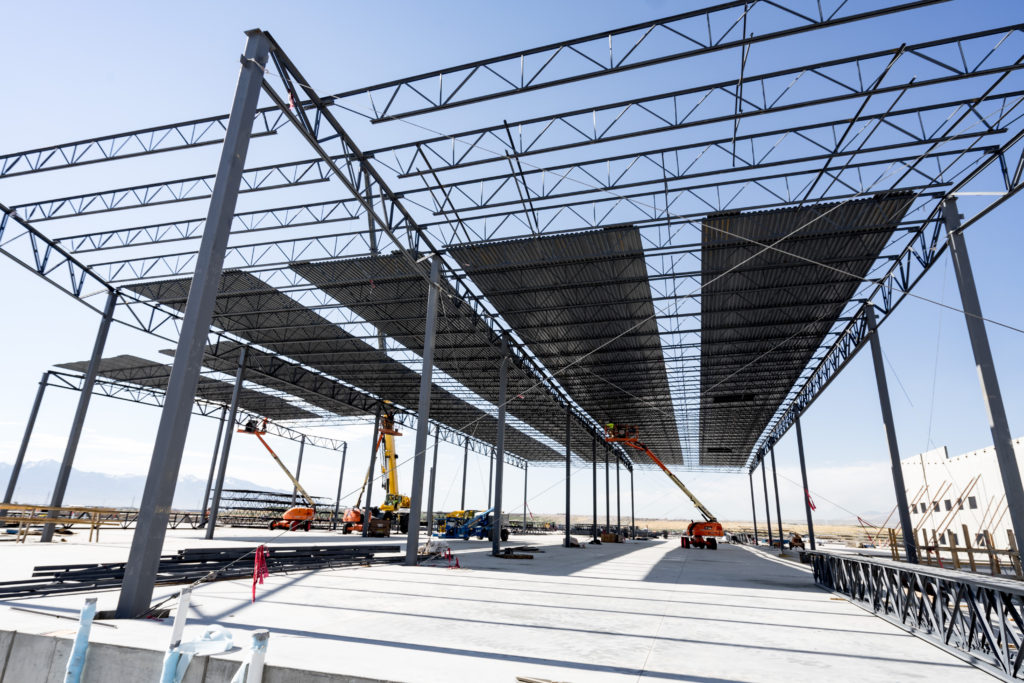 As the building gets taller the vertical stresses on the building increase from the increased weight. Three-story buildings have all of the previously mentioned design considerations but are often controlled by a different aspect of the design. Jambs are again the concern as in one-story buildings, but for a different reason. Instead of lateral forces causing the jamb to be larger, the axial force controls. The ACI 551.1R-14 Section 4.2 requires that the maximum axial stress on the design width bd be limited to 0.06f’c . This provision requires the building to become thicker at the jambs, or to have a higher strength concrete.

Tilt-up buildings taller than three stories are possible in Utah, but usually are not cost effective. The volume of concrete and the compressive strength of concrete must be increased to satisfy the 0.06*f’c*Ag requirement, and this increases the cost significantly. Currently intermediate concrete shear walls, the type of walls typical of a tilt-up building, are limited to 40ft. Cost comparisons, including labor and material costs, are always variable and constantly being evaluated. This concept, in addition to advancements in system testing and code acceptance may provide a way to make them cost-effective in the future.

So, what does all of this mean? In Utah, multi-story tilt-up buildings can save the owner money. They can be a cost-effective option for larger buildings with a repeatable design that are part of group of buildings.